If you want to dress up as one of America’s most iconic musical characters, you should transform yourself into one of Grease’s most memorable stars…Rydell High’s cool girl Betty Rizzo played by Stockard Channing is one of the stand out characters of the Pink Ladies in the classic musical Grease…. Read more »

Back in 1978, a young actor named John Travolta played the cool Fifties Greaser Danny Zuko in the hit musical film Grease. Moviegoers enjoyed the cinematic time warp back to the Fifties filled with likable characters and catchy musical numbers, making the nostalgic movie an instant hit! If you want… Read more »

Remember Rizzo, Frenchy, and the other cool girls of Rydell High School from the classic movie Grease? Of course, they are the colorful Pink Ladies of Rydell High! If you are a fan of the Grease movie and musical productions, you know that this classic 1950’s cool girl clique are… Read more » 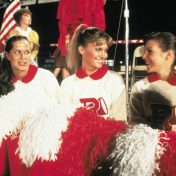 For next Halloween (which is very soon) you can revive the spirit of the 1950’s by wearing nostalgic costumes and dresses inspired by the hit movie Grease starring Oliva Newton John as Sandy Olsson! Do you want to dress up as the good Sandy Dee Olsson who appears at the… Read more »

In the late 1970’s, filmgoers of all ages and backgrounds watched the classic musical Grease projected onto the movie screens across America and around the world, introducing fans to the beautiful and talented singer Olivia Newton-John who played her most memorable role as the sweet “girl next door” Sandy Olsen…. Read more »

You can’t forgot about Frenchy…the high school girl who loves pink is one of the most iconic characters that is a unique stand out on both the theatrical and cinematic version of the musical Grease! The full name of Frenchy is Francesca Alicia Facciano. She’s one of the more fun… Read more »