Batman Grand Heritage Costume Based on the movie Dark Knight, this Batman costume is a super deluxe super hero outfit that will impress any fan of the Dark Knight series.  Available in size medium, large, and extra large! 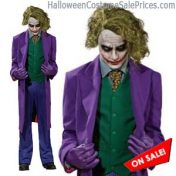 There has been many incarnations of the Joker character in several popular Batman movies. If you seen Christopher Nolan’s spectacular Batman movie sequel The Dark Knight, you remember Heath Ledger’s memorable performance and portrayal of Batman’s ultimate nemesis The Joker.  Even after 10 years, Batman fans still admire his character… Read more »